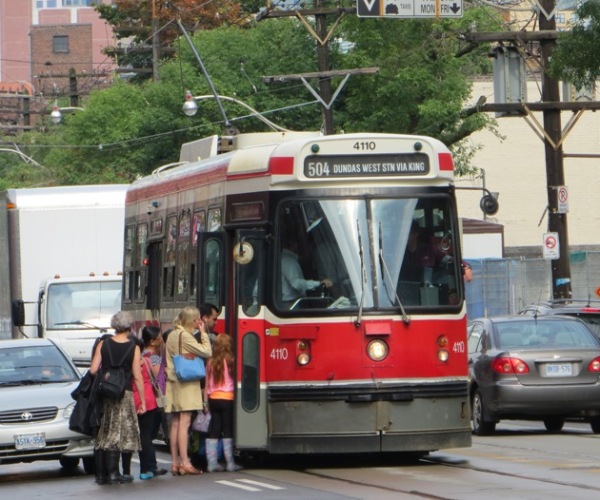 A recent Toronto poll found that opinions of metro-area respondents were almost evenly split on a plan to ban motor vehicles and allow only streetcars to operate on King Street (one of the downtown’s major thoroughfares) during morning peak hours, with 40% favoring the idea and 43% opposing it. While the plan had overwhelming support in the inner-city, the metro area’s more affluent, conservative suburbs (e.g., Scarborough) tended to oppose it. (Suburban voters have also tended to support conservative Mayor Rob Ford, who promotes policies similar to those of the USA’s Tea Party.)

The poll elicited the following observations and comments from Edson L. Tennyson, a renowned transportation engineer and consultant to the Light Rail Now Project. Ed is widely respected within the North American public transportation industry, having served as manager of several major transit agencies as well as Transportation Engineer for the City of Philadelphia and Deputy Director of Transportation for the State of Pennsylvania.

Without facts the people responding to that poll do not know what they are talking about. Since King Street is in the Old City, what business is it of Scarborough?

Let us look at the facts. A lane of autos waiting at traffic signals can move only 900 passengers per hour, not enough to keep a city busy or healthy. I do not know the streetcar headway, but with 56,700 weekday passengers, it sounds like 4,500 one-way in the peak hour, 5 times auto capacity. With 90 people per 4-axle car, that would require a 1.2-minute headway, 50 cars per hour. With articulated cars, a 1.8-minute headway could handle it.

The point is, who wants to allow 900 [Mayor Rob] Ford supporters to block the movement of 4,500 people per hour? Polls will not move anyone, but those 800 automobiles with 900 people will block 4,500. That is stupid, uneconomical, and grossly unproductive. When gridlock gets bad, transit speed falls to three (3) miles per hour. A streetcar costing $235 per hour will cost $78 per mile at three miles per hour; but at 6 miles per hour, which might be possible with no autos, the streetcar cost falls to $39 per mile, a saving of 50 percent for farepayers and taxpayers. If the media had the integrity and equity to explain it that way, I am sure the polls would change drastically in favor of streetcars.

[Misguided] politicians like Mayor Ford were running the U.S. Congress in 1959 when they banned streetcars from the District of Columbia [i.e., Washington, DC]. They did it to speed auto travel, but it did not work that way. It sped auto travel, all right — away from the city instead if into it.

The last [Washington] streetcar ran in 1962. Buying new buses escalated fares drastically and drove away most riders. Many downtown department stores went out of business. People with good jobs moved out of the city to escape auto congestion caused by automobiles, not streetcars.

By then, MetroRail [rapid transit] was growing large enough to replace the streetcars and greatly reduce bus dependence. Transit increased almost 300% from 1975 to now. The Mayor just announced a tax cut as the city has too much money. The population is growing with higher-income people.

When MetroRail was planned they took a close look at Toronto to get it right. They did. [URT note: Washington, DC’s Department of Transportation has projects under way to re-introduce streetcar service to the city, thus supplementing the Metrorail rapid transit system.]

[This article has been slightly edited from the version first published on the Light Rail Now blog. Thanks to Light Rail Now for their kind permission to re-publish it.]