This commentary has been adapted from a December 19th statement by the author to supporters of the campaign to continue Cincinnati’s streetcar project, immediately after the favorable vote by the City Council.

With the City Council’s vote on December 19th to resume Cincinnati’s streetcar project, our city confirmed its will to continue along the path to a balanced transportation system. Our path has been up and down with lots of twists and turns and leaps of faith that took us to unknown places. But we soldiered-on, and now the path is wider, flatter, and clearly marked for others to follow, not only in Cincinnati but in other cities that want to gain more citizens and become more competitive.

There are so many people to thank, but first and foremost, I want to thank former Mayor Mark Mallory, Vice Mayor Roxanne Qualls, and City Manager Milton Dohoney. Even though we reached our goal on December 19th, we wouldn’t have even been in the game were it not for their leadership of the Cincinnati Streetcar over many years. Their support cost them dearly, and we should be forever grateful.

And to our long-time champions on City Council — Chris Seelbach, Yvette Simpson and Wendell Young whose eloquence and persistence following the election, working with PG Sittenfeld, brought their colleagues, Vice Mayor David Mann and Councilmember Kevin Flynn, along to enable us to continue along our path.

Immediately after the December 19th vote, Mayor John Cranley was very gracious in offering his congratulations to me and to others. I hope this period of divisiveness now passes and that we can all join with him and Christopher Smitherman, Charlie Winburn, and Amy Murray to foster the city we all want to have.

Were it not for Ryan Messer, who parachuted-in to lead this effort in early November, we would not have succeeded. The kind of leader who emerges every ten years or so here, he brought new energy to our movement. Early-on, he recruited our attorney, Paul DeMarco, who used his contacts at the highest level of our nation’s government to bring about the results we achieved, to assure the Feds we knew where we were going. Early-on, without a hint of hesitation, Karen Blatt volunteered our spiffy campaign office, and Ryan hired Scott Allison to execute the flawless campaign to gather signatures. Others including Jean-Francois Flechet, Sean Lee, Rob Richardson, Jr, Margy Waller and Brad and Karen Hughes did whatever had to be done and were the wisest advisors and best team-players anyone could have.

There are so many others that contributed so much to this effort that I cannot mention them all but they are all strongly appreciated. Suffice it to say that this effort could not have been sustained over all these years without all the people who have been involved.

Eric Avner of the Haile Foundation raised $9,000,000 in a little over 48 hours, enough to make City Council comfortable that the cost of operating the streetcar was assured for the first ten years. This was the keystone of the plan to save the streetcar.

There were many memorable moments in this campaign. One I’ll never forget was the December 10th meeting at First Lutheran Church near 12th and Race, where 450 people showed up to sign-out their petitions. Chris Heckman and Kristen Myers are members of the congregation, and they quickly arranged for the church to open its doors twice to us. I’m certain this set the tone for the whole campaign. 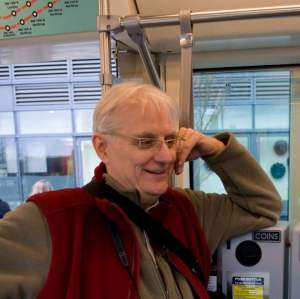 Speaking of the campaign, we now have 11,000 Cincinnatians’ names and addresses for our efforts going forward. The planning and execution of the signature-gathering was orchestrated with great precision by The Strategy Group and its able leader, Ian James, who made a critical judgment that the number and intensity of our volunteers was more than adequate to gather the signatures. We wouldn’t need paid signature-gatherers. Plus, it gave us all an opportunity to tell the streetcar’s story in the way we know it. And by the way, we registered a bunch of streetcar supporters to vote in the process.

Our thanks go well beyond Cincinnati to the many people in many cities who have been watching our project intently, including especially Portland’s mayor, Charlie Hales and his wife Nancy, who have joined us on many of our trips there over the years. When he was in the private sector, Charlie helped plan the Cincinnati Streetcar, and he has been a guiding light for me. We’re not finished with the Portland trips. They have an early spring there.

Most of all, we should all thank our spouses, families, employers and co-workers for tolerating our absences over the past days and nights. They were soldiers in this too.

I hope that in this new year everyone will continue to work harder than ever to bring more diverse transportation choices to our city, Cincinnati, or to whatever city where you live.

Tucson, Arizona — It’s still many months away, but public anticipation of the opening of Tucson’s brand-new streetcar system has been building. And it’s getting a huge boost from the local Friends of the Streetcar group.

In collaboration with merchants at Main Gate Square outside the main entrance to the University of Arizona, the pro-streetcar group is sponsoring Streetcar Celebration: Destination Main Gate Square, a special celebration on January 15th, one of several shindigs the organization has been initiating to raise awareness and feed anticipation for the new service.

The 3.9-mile, $196 million modern streetcar line is due to open in mid-2014 after rolling stock supplier United Streetcar delivers all eight streetcars on order.

The upcoming festivities, scheduled on a Wednesday afternoon between 4:00 and 7:00 pm, will include performances by musical groups, a street performance group called Cirque Roots (featuring stilt walkers, hoop dancers, and acrobats), “fun with 2-EEE the Clown Face Painting and Balloons, a free photo booth by Bumblebee Photobooth with souvenir photos and more”, according to a report in The Explorer, a local publication. The Arizona State Museum will be open until 7:00 pm allowing free admission, and a number of restaurants, cafes, and various retailers are offering substantial discounts.

With opening of the new urban rail system scheduled for much later in the year, these events in Tucson by local rail supporters may provide an example of how to build public enthusiasm for the service — and hopefully pay off in higher ridership when the trains actually start rolling.