Austin, Texas — Sometimes there are rail transit plans (and other urban development proposals) that are just plain misguided and potentially deleterious to a city’s best interests. That was the case with the urban rail scheme proposed for Austin, resisted by some of the city’s most dedicated and savvy rail advocates, and rejected by voters on Nov. 4th by a 14-point margin, 57% Against to 43% In Favor.

Counterintuitive though it may seem, this was not only a huge success for transit advocacy but also a major victory for rail development in Austin. The official plan, developed via a disastrously flawed study by a multi-agency consortium called Project Connect, would have committed $1.4 billion to a 9.5-mile “urban rail” line (a local proxy term for light rail transit, or LRT) in a virtually non-existent corridor, running from a northern site called Highland through the east side of the city’s core, across the Colorado River, to a southeastern terminus on East Riverside Drive. (The Nov. 4th ballot measure asked voters to approve $600 million of General Obligation bonds for the urban rail plan, with the assumption that the remainder would be covered by federal grants and other sources.)

Not only was it a seriously flawed route, but it was also seriously over-designed (I called it “gold-plated”). Encountering formidable alignment challenges (e.g., constricted rights-of-way, sharply tortuous curves, a river crossing, and an in-roadway crossing over I-35), the proposal called for a pricey “signature bridge” and a $230 million subway for which the need was in dispute. As a result, the plan would have calculated as the third most expensive LRT starter line in U.S. history. And that massively wasteful encumbering of local funding capability would have, in effect, “sucked the oxygen” from local resources and strangled further rail development and expansion.

But high cost wasn’t the worst problem with the Highland-Riverside proposal (after all, even a good, cost-effective plan could have a high pricetag). Instead, mobility needs were virtually sidelined in deference to local development objectives (and these were basically misguided). Fundamentally, the plan ignored the city’s most central heavy-traffic local corridor, defined by two major arterials named North Lamar Blvd. and Guadalupe St., which funnels major travel from the northwest, north, and northeast through several miles of activity concentrations and finally into the Core Area — the University of Texas, state Capitol Complex, and Central Business district (CBD).

Potential daily LRT ridership serving this corridor has been assessed in the range of 30,000 to 40,000 — roughly 2-3 times that of the now-defunct Highland-Riverside plan. And this relates directly to urban development: By and large, developers will invest and build where the ridership is. Mobility is the key — provide a solid mobility project, and development will follow.

That’s where Project Connect’s rail plan fell way short. But, in contrast, what has all the hallmarks of a real winner of an extremely cost-effective alternative plan is emerging to take its place, this time in the crucial Guadalupe-Lamar corridor. Currently referred to as Plan B, the latest version of this alternative proposes a 6.8-mile LRT starter line running from the major North Lamar Transit Center at U.S. 183 into the Core Area. Along the way, the line would connect with Austin’s existing MetroRail regional passenger rail service and serve a spectrum of major commercial and residential developments, established neighborhoods, and activity centers — plus the West Campus, with the third-highest residential density in Texas. All of this was missed by Project Connect’s plan. See: A “Plan B” proposal for a Guadalupe-Lamar alternative urban rail starter line. 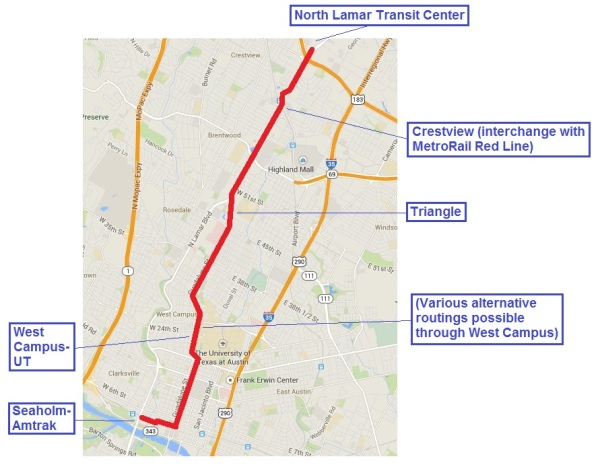 Plan B LRT line would stretch 6.8 miles from a major transit center on the north to the CBD, with a branch west to the Seaholm-Amtrak development site. Map: Austin Rail Now.

This version of Plan B LRT for Guadalupe-Lamar also includes a branch from downtown west to a major development site at the city’s former Seaholm power plan, adjacent to the Amtrak train station (a connection originally proposed by Project connect but missing in the final 9.5-mile highland-Riverside plan).

In addition to striking the right balance between meeting mobility needs cost-effectively and catalyzing desirable development, there’s an additional major lesson to be gleaned from Austin’s recent urban rail planning and voting experience: Connect with the grassroots community.

Much of the Austin community’s discontent with Project Connect’s “study” process (mainly from June through December 2013) resulted from a sense of alienation from the process and the proposed plan that emerged from it. Project Connect claimed a vigorous “public participation” program, with dozens and even hundreds of “meetings”. But, rather than true community meetings, facilitating bona fide discussion and community decisionmaking, and enabling various segments of the community to interact with one another, the official “participation” process mainly involved presentation events, with project personnel unveiling decisions reached in seclusion by the project team. Members of the community, excluded from this process, were typically given the opportunity merely to select among a handful of choices; meanwhile, the major structure and contours of the plan were determined by political officials and project team staff.

Hopefully, this will change substantially — particularly with a new, expanded City Council, elected via a new district structure. Community activists and rail transit advocates have been interacting with new political leaders in an effort to institute a more democratic process with grassroots representation and participation directly in the development of plans.

Perhaps this kind of grassroots process will materialize in a way to shape and advance the prospects of Plan B light rail for Guadalupe-Lamar.

• Austin: After urban rail plan failure, opponents spar over a “Plan B”
http://www.examiner.com/article/austin-after-urban-rail-plan-failure-opponents-spar-over-a-plan-b 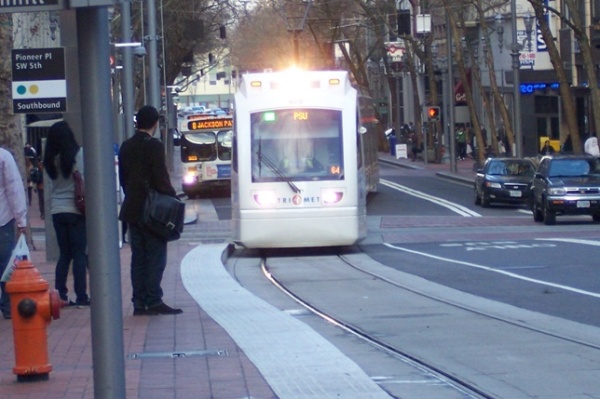 ♦ How can both buses and light rail transit (LRT) trains share the same transit-priority paveway or street? There are numerous examples that answer this, but certainly one of the best is in Portland, Oregon — the 5th and 6th Avenue transit malls.

Recently, the Austin Rail Now (ARN) blog posted an article focusing on Portland’s transit malls, and because of the more general usefulness of this information for many more communities, we’re re-posting it here with the kind permission of ARN. (It’s also been re-posted by the Light Rail Now blog.)

The opening context for the article is the urban rail planning project currently under way by the City of Austin, Capital Metro (the transit authority), and a transit planning consortium called Project Connect. Transit priority lanes are now being installed on two major downtown north-south streets, and it’s been expected that urban rail trains would share these with buses, including the MetroRapid premium-bus services now being implemented in several major city corridors. However, some transit advocates are noting that these lanes may have insufficient capacity to handle all the bus routes plus MetroRapid, much less adding LRT into the mix.

Portland’s experience thus provides an illustration of how LRT trains and buses can share a priority alignment in a way that works well.

Capital Metro and the City of Austin have a project under way to designate “Transit Priority Lanes” on Guadalupe and Lavaca Streets downtown between Cesar Chavez St. and MLK Jr. Blvd. It’s mainly to expedite operation of the planned new MetroRapid bus services (Routes 801 and 803), but virtually all bus routes running through downtown will also be shifted to these lanes, located on the far-righthand side of traffic on each street (i.e., the righthand curbside lanes).

According to a 2011 study funded by the City of Austin, the Official (City + Project Connect) Urban Rail route is also envisioned to use these lanes downtown. Alternatives to the Official plan have also assumed that these routes would be available for alternative urban rail lines serving the Guadalupe-Lamar corridor.

However, there are legitimate questions as to whether these two lanes could simultaneously and effectively accommodate the two MetroRapid bus routes (10-minute headways each) plus all other Capital Metro routes (various headways) as well as urban rail (10-minute headway), all running in both directions.

Experience with both light rail transit (LRT) trains and buses sharing the same running way is rare in the USA, but one of the best examples can be seen in Portland, Oregon. For years, 5th and 6th Avenues through the downtown have been used by multiple bus routes as a transit mall, with a single lane provided for general motor vehicle access. In September 2009 LRT was added with the opening of the new Green Line; see: Portland: New Green Line Light Rail Extension Opens.

The integration of LRT with bus service in the 5th and 6th Avenue transit malls has worked well. Here’s a brief photo-summary illustrating some of the configurational and operational details.

This illustrates how both bus services and LRT trains share the mall. Tracks, embedded in the pavement, weave from curbside to the second lane over. A third lane is kept open for mixed motor vehicle traffic.

This photo shows how the Green and Yellow LRT lines on the 5th Ave. transit mall cross the Red and Blue LRT lines running on 5th St. You’re looking north on 5th Ave., and just across the tracks in the foreground, the LRT tracks on 5th Ave. weave from the middle of the street over to the curbside, where a station-stop is located. This allows LRT trains to access stations but otherwise pass buses stopped at bus stops on the same street. 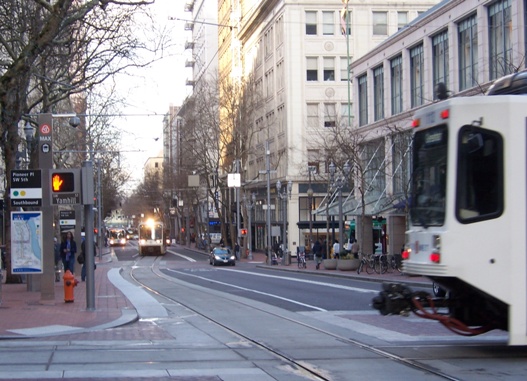 Here an LRT train has just left the curbside station, following the tracks into the middle lane of the street. This track configuration allows the train to pass a bus boarding passengers at a stop. 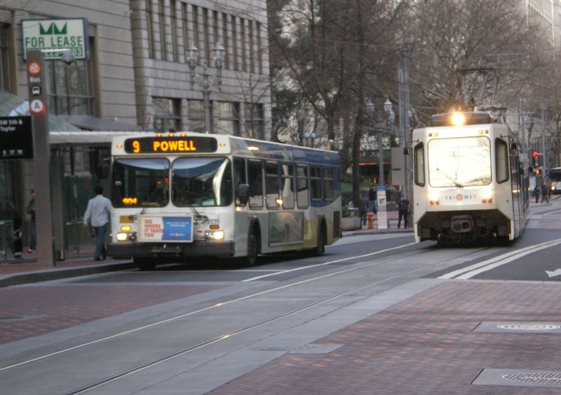 Another train moves to the street center lane and passes the bus stop. Meanwhile, other buses queue up at the street behind. 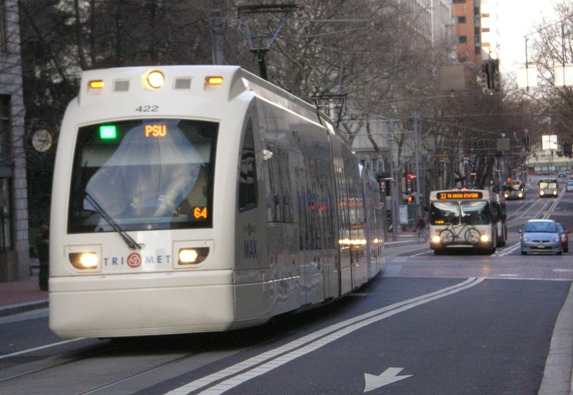 Buses are prone to “bus bunching” (queuing) in high-volume situations because of their smaller capacity, slower operation, slower passenger boarding/deboarding, difficulty adhering to schedule, etc. However, notice how they’re channeled to queue up in a lane off the LRT track. 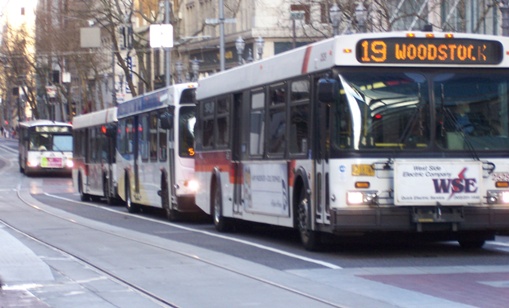 Can and will Austin and Project Connect planners learn anything about how to create workable Transit Priority Lanes from examples like this? Time will tell…